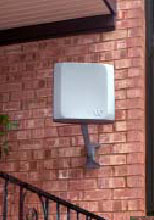 This is a good antenna, but not as good as a DB-2.  Obviously the Square Shooter was made to look like a satellite dish antenna, hoping for sales among people who have decided that having a satellite dish is “OK”.

The Square Shooter is advertised as being useful for VHF.  In fact this antenna is an oddity in that it is horizontally polarized for UHF, but vertically polarized for VHF.  For a TV receiving antenna, vertical polarization is usually worthless.  When its response to vertical polarization is subtracted out, what is left is an antenna far worse than rabbit ears for both VHF-high and VHF-low.  If you tilt this antenna slightly to the right or left you might see reception of a very strong VHF station.