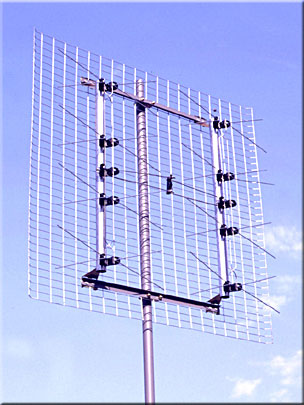 This page describes the old 4228.  That antenna is mostly sold out nationwide.  I have written a review of the currently available 4228HD.  That review is on a Temporary Page.

Channel Master says this is their best UHF antenna.  It is probably the best overall UHF antenna available.  But it is not without its faults.  Since it is just two 4-Bays hooked together, one would expect its gain to be 4 dB better across the band (3 dB for being twice the antenna plus another dB for the continuous screen blocking more radiation out the back).  But its special feed lines are badly designed.  They radiate and are poorly matched to the line.  The 4-Bay outperforms it above channel 60.  Replacing the feed lines with two baluns and a splitter would probably yield a higher net gain.  (The author has not tried this.)

The 4228 is galvanized steel.  At 8 lb it is very heavy.  The weight becomes a severe problem when ganging two or more together on a roof.  About half of the time it comes with the screen improperly clamped on.  The author performed simulations both with the two screen touching and with them separated.  There was no significant difference at UHF frequencies.

High gain antennas like this one are big, hard to aim, and hard to keep up in bad weather.  The author does not normally recommend this antenna inside 25 miles.  But there are two exceptions to this:

This antenna is advertised solely as a UHF antenna.  But, as many people have discovered, it has strong gain for VHF-high, especially channel 9-13.  What gives it this ability is the continuous screen.  Other 8-bays have a reflector that is not continuous across the right and left halves.  Those antennas have little usefulness for VHF channels.

The continuous screen is not simply a reflector for these channels, but rather it becomes the primary radiating element.  As a result, radiation out the back is very strong, nearly bi-directional for some channels.

If you buy this antenna for VHF there is one problem:  The screen is in two halves that touch but are not solidly connected to each other.  This brings up two questions:

The graph below shows simulations both with the screens connected and with them slightly separated.  There is a significant difference in gain between the two cases.  This means you might see dropouts when the wind blows.  To prevent this you should bind the two screens together more tightly (VHF only).  The author has done this using a few common nylon tie-wraps.