Shown above is the radiation diagram for a 9-element Yagi antenna that the author once used to receive channel 12.  To interpret this diagram, imagine that the antenna is at the origin.  The length of a line from the origin to any point on the surface is proportional to the gain in that direction.

An antenna made for analog TV will work fine for DTV.  There is nothing different about an antenna for DTV or HDTV.  Unscrupulous people have labeled their antennas “HDTV Antennas” as a marketing ploy.  The honest antenna makers have had to re-label their products likewise to avoid losing sales.

Gain – a measure of how much signal the antenna will collect.

Beam width – how directional an antenna is.

Bandwidth – how the gain varies with frequency.  A narrowband antenna will receive some channels well, but other channels poorly.

This is an easy page.  But if you want, you can skip or skim the rest of this page without compromising your understanding of the pages that follow.

This is the simplest TV antenna.  Variations on the dipole are the bowtie (which has wider bandwidth), the folded-dipole (which can solve an efficiency problem) and the loop (a variation on the folded dipole).  All four have the same gain and the same radiation field: a torroid (doughnut shape).  The gain is generally 2.15 dBi.  “dBi” means “dB of improvement over an isotropic radiator”, which is an antenna that radiates equally in all directions.  This sounds like a discussion of transmitting antennas, and it could be.  An antenna will have the same gain when receiving as when transmitting, and also the same radiation pattern.

The dipole has positive gain because it does not radiate equally in all directions.  This is a universal truth.  To get more gain, an antenna must radiate in fewer directions.  Imagine a spherical balloon.  Now press on it from opposite sides with a finger of each hand.  Push in until your fingers meet.  The result looks like the torroid above.  But more importantly, the balloon expanded in the other directions.  A-hah! Gain!  That’s the way antennas work.

Keep this balloon analogy in mind.  More complicated antennas work by reducing radiation in most directions.  They distort the balloon considerably, but the volume of the balloon remains constant.

Another rating system for antennas uses dBd, which means dB of improvement over a dipole antenna.  To convert dBd to dBi, just add 2.15.  Antenna makers specify their gains in dB.  They actually mean dBd, but given the way they exaggerate their claims, dBi is usually closer to the truth.

In the US, TV antennas are always horizontal.  If you rotate an antenna about the forward axis (a line from the transmitting antenna) the signal strength will vary as the cosine of the angle.  In other words, when the antenna elements are vertical, no signal is received because TV signals have horizontal polarization.

Two heads are better than one, and so it is with dipoles.  N dipoles will take in N times as much RF power as one dipole, provided they are not too close to each other.  Thus a 4-dipole antenna would have a gain of 8.15 dBi.  (That is 2.15 dBi doubled once (plus 3 dB) and doubled again (plus another 3 dB).)  This assumes their positions and cable lengths are adjusted so that their signals add in-phase.  This explanation of gain may seem at odds with the balloon explanation, but ultimately they are equivalent.  (Adding dipoles does not increase the volume of the balloon because phase cancellation occurs in some directions.)

Lets say you are 20 miles from a city and TV transmitters are scattered all over the city.  A medium gain antenna might be too weak, but a high gain antenna would be so directional you would need a rotor.  Solution:  A bunch of dipoles stacked vertically would give you the gain you need.  The vertical narrowness of the resulting beam is of little importance, but the horizontal broadness of the beam means no rotor needed.

Radio waves will reflect off of a large conducting plane as if it was a mirror.  A coarse screen works just as as well.  Reflector antennas are very common. 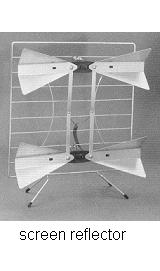 The double bow-tie above has an average gain of 6 dBi.  With a bigger screen it would have more.  The parabolic reflector focuses the signal onto a single dipole, but its bandwidth is a little disappointing.  The corner reflector has a little less gain but much greater bandwidth.  The corner reflector has roughly the gain of three dipoles.  It is a good medium gain antenna, widely used for UHF.  If you need more than 25 dBi then the paraboloid dish is the only practical choice, but they are huge.

The LPDA has several dipoles arranged in echelon and criss-cross fed from the front.  The name comes from the geometric growth, which is logarithmic.

This is a very wideband antenna with a gain of up to about 7 dBi.  For any frequency, only about three of the elements are carrying much current.  The other elements are inactive.  As frequency increases, the active elements “move” toward the front of the array.  Most VHF TV antennas are LPDAs.

TV LPDAs come in two types: straight and Vee.  The Vee type (LPVA) has a very slightly higher gain for channels 7-13.  But this author often favors the straight type since it has nulls 90° to each side that can be used to cancel out interference.

A Yagi antenna has several elements arranged in echelon.  They are connected together by a long element, called the boom.  The boom carries no current.  If the boom is an insulator, the antenna works the same.

The Yagi is the most magical of all antennas.  The more directors you add, the higher the gain becomes.  Gains above 20 dBi are possible.  But the Yagi is a narrowband antenna, often intended for a single frequency.  As frequency increases above the design frequency, the gain declines abruptly.  Below the design frequency, the gain falls off more gradually.  When a Yagi is to cover a band of frequencies, it must be designed for the highest frequency of the band.

An antenna has an aperture area, from which it captures all incoming radiation.  The aperture of a Yagi is round and its area is proportional to the gain.  As the leading elements absorb power, diffraction bends the adjacent rays in toward the antenna.

The formula for the aperture area of any TV antenna is   A=Gl2/4p   where l is the wavelength and G is the gain factor over an isotropic antenna (not dB).

Question:  How does the energy collected by the directors get to the cable?

Answer:  It is re-radiated to the driven element as normal radio waves.

Question:  Why don’t the re-radiated waves go backward or laterally?

Answer:  Because all the directors cancel each other in those directions.

Question:  Why don’t these re-radiated waves prevent the diffraction of incident waves inward toward the boom?

Answer:  Because the phase of the re-radiated waves has been changed by about 90 degrees, so they neither subtract nor add to the incident waves.

Question:  How did the director currents get changed by 90 degrees?

Short answer:  The element lengths control this.  The director currents are shifted -90 degrees while the reflector current is shifted +90 degrees.

Long answer:  This graph shows how the current induced in a rod is affected by the length of the rod.  The phase changes quickly with a small change in element length.

The current in the metal rod can be thought of as a standing wave: a signal bouncing back and forth in the rod until it dies out, meanwhile getting reinforced by incoming energy.  If the rod is too long, the bouncing signal quickly falls behind the incoming signal.  When it gets more than 90 degrees behind, it subtracts from the incoming signal.  A rod too short is a similar case.

The bandwidth of a Yagi can be increased by sizing the reflector for the lowest frequency of the band while sizing the directors for the highest.  But this decreases the best gain of the antenna.  (It is said that the gain-bandwidth product remains the same.)  A better way to increase the bandwidth is to replace the reflector element with a corner-reflector assembly.

This boosts the performance on the lower numbered channels without hurting the high channels.  Although the Yagi/Corner-Reflector might not be the best antenna, it is the most common UHF TV antenna, mainly because it can be mounted on the front of a VHF antenna without degrading the VHF antenna.

The graph above shows the gain functions for four TV antennas:

The point of this graph is that a Yagi/Corner-Reflector performs like a Yagi for the high numbered channels and a corner reflector for the low numbered channels.  For the middle channels it outperforms the sum of the two types.

A UHF Yagi today is designed for channel 69.  If you see an old Yagi, it might be intended for channel 82.  In the future they will be cut for channel 51.  It is not possible to tell by looking at a Yagi which era it belongs to, so be careful.

As you can see, the 8-Bay is a very directional antenna.  If miss-aimed by 5° you can lose 1 dB of signal.  If the skyline is more than 5° above horizontal, you should tilt the antenna up to point at the skline.

The overhead view shows nulls at 30° and 90° to both sides.  These can be used to eliminate multi-path (ghosts) or interference.  You simply rotate the antenna until the offending signal is in one of the nulls.

A Yagi also has some forward nulls that can be used as ghost killers.  But a Yagi/Corner-Reflector acts more like a corner reflector for most channels, and has no nulls.  At channel 60 you can finally see the Yagi pattern start to emerge.

But the high gain means it is hard to aim.  In good-signal areas, avoid high gain antennas.

Front-to-back ratio  (Is this number important?)

Antenna elements (how many?)